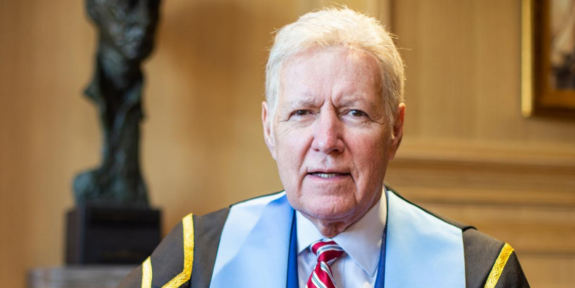 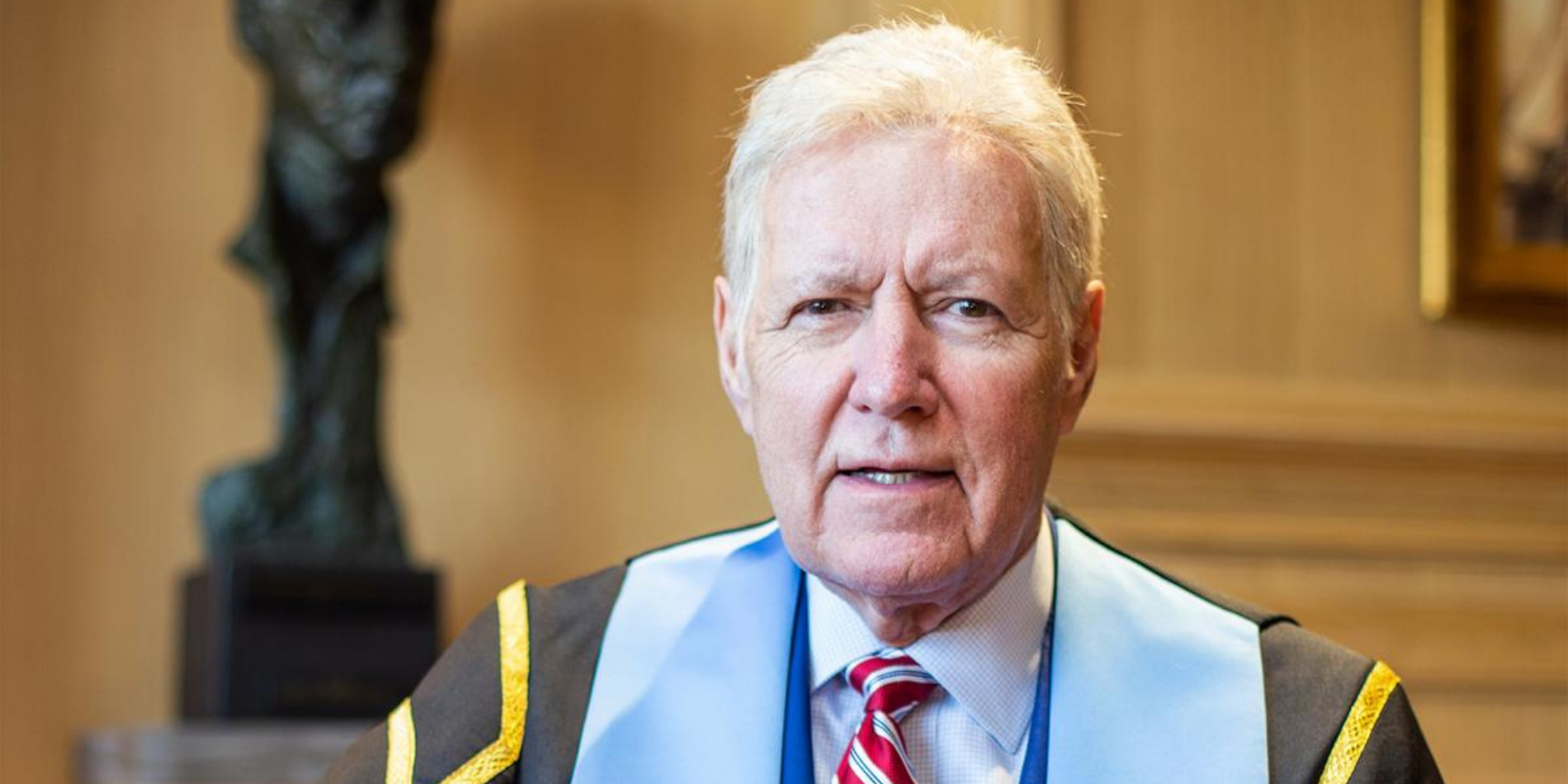 Alex Trebek in his RCGS robes, at the RCGS headquarters at 50 Sussex Drive.

While best known as the host of Jeopardy!, the Honorary President of The Royal Canadian Geographical Society was one of the planet’s biggest champions of geographic knowledge and education.

Thirty-six years ago, Alex Trebek strode out from behind a huge orange Jeopardy! sign to join his first three contestants on a revamped stage. At 44, his relative youth and polished on-camera charisma had been a crucial factor in producers agreeing to relaunch the already twice-cancelled show, but even as he gave his first answer (“These rodents first got to America by stowing away on ships”), many executives remained convinced that the program was “too smart” to hook North American viewers.

Their gamble, however, would pay dividends. Buoyed, perhaps, by the early years of the Trivial Pursuit craze, Jeopardy! earned a huge audience that proved both ready to play along with smarter programming and willing to let an unflappable, sharp-dressed Canadian host make them smarter. Trebek was soon cemented as a pop culture icon, the face of what many now consider the greatest game show in television history. He was also a huge advocate for geographic education, having served as The Royal Canadian Geographical Society’s Honorary President since May 2016, and having been a key supporter of Canadian Geographic Education’s Canadian Geographic Challenge, the national student geography competition. He had hosted it numerous times.

Sadly, “the man with all the answers” recorded his last episodes this past summer. On March 6, 2019, Trebek announced that he had been diagnosed with stage IV pancreatic cancer. In a video address to his fans at the time, he acknowledged that while the prognosis was not great, he would aggressively fight the cancer. He memorably joked that he had to beat the odds, as he was contractually obligated to continue hosting Jeopardy! for three more years.

Trebek provided a number of updates on his health in the interim, including during a visit to Ottawa in October 2019 to celebrate the 25th anniversary of the Can Geo Challenge. In an interview with CTV at the time, he said “I’m not afraid of dying,” and “I’ve lived a good life, a full life, and I’m nearing the end of that life … if it happens, why should I be afraid of that?” A little more than a year later, on Nov. 8, 2020, Trebek died peacefully at his California home, surrounded by friends and family.

Jeopardy! is saddened to share that Alex Trebek passed away peacefully at home early this morning, surrounded by family and friends. Thank you, Alex. pic.twitter.com/Yk2a90CHIM

Trebek has been an international household name since that 1984 Jeopardy! season — and a familiar face to many Canadians before that — but his support for student programs and humanitarian work has gone largely unknown to millions of his fans. In particular, the Honorary President of The Royal Canadian Geographical Society was a champion of geographic education, travelling often during the past three decades to host student geography competitions such as the aforementioned Canadian Geographic Challenge finals and the U.S. National Geographic Bee, and through the Trebek Family Foundation providing crucial support to the growth of the RCGS’s headquarters at 50 Sussex Drive, Ottawa, and educational programs.

“I am devasted, and our entire community is deeply saddened by the passing of Alex Trebek,” says RCGS CEO John Geiger. “His love of country, his love of geography, his love of young people and commitment to their education inspired us all. Alex was without question one of the most important people in the 90-year history of The Royal Canadian Geographical Society. He has been an incredible supporter of the RCGS and our vital mission. He was a graceful and gallant man.”

And when it came to geography, the Sudbury native and Franco-Ontarian turned often to Canada — specifically Ottawa, which, he was quick to say, held a special place in his heart. Sent at a young age to the Oblates of Mary Immaculate prep school, which was based out of the administrative building on the University of Ottawa campus, he looked back fondly on his formative years in the nation’s capital, and credited the priests at the school for tempering his “rebellious nature.” Post-secondary education didn’t take him further afield, as he studied philosophy at the university. In a 2016 interview with Canadian Geographic, he reminisced about riding streetcars into Gatineau for the bars, wandering the Byward Market and visiting the Château Laurier for the pool and the occasional straight-razor shave at the hotel’s barbershop. He graduated from the University of Ottawa in 1961.

Then Trebek started working as an announcer for CBC Radio. Before long he’d been posted to Toronto to appear on the broadcaster’s national radio and television programming, hosting everything from Music Hop (a live music show for teens) to championship curling events and the popular student quiz show Reach for the Top — this latter program something of a first step in a career of challenging viewers of all ages to know their geography, politics, history and pop culture.

It can be difficult for Canada — and perhaps selfish — to keep its finest citizens all to itself, and by the early 1970s, Trebek’s on-air sang-froid had caught the eye of American producers. Wooed south of the border, Trebek spent more than a decade hosting a string of NBC and CBS game shows before media mogul and game show developer Merv Griffin tapped him for the pilot episodes of the 1984 Jeopardy! revival. The show had been popular, but had aired and was cancelled more than once between 1964 and 1979. The 1980s incarnation, though, was the birth of a television phenomenon.

We have lost an icon. Almost every night for more than three decades, Alex Trebek entertained and educated millions around the world, instilling in so many of us a love for trivia. My deepest condolences to his family, friends, and all who are mourning this tremendous loss. pic.twitter.com/XoobAfJwBv

It was a revitalization in the order of nearly 8,000 episodes (a Guinness World Record) more than 35 years, during which more than 400 other game shows have been conceived, broadcasted and ultimately dropped by American television stations. And even though Trebek sported a closer crop on his curly hair in recent years than in the ’80s, and despite the fact his famous moustache had been mourned by fans since it was shaved away during the 2001 season, his characteristic poise and witty, occasionally sarcastic charm never diminished. Over the years, Trebek made dozens of appearances (almost always as himself) in movies and television shows, from Groundhog Day to The X-Files, The Simpsons and The Amazing Race Canada.

Within the first few years of taking the Jeopardy! helm, Trebek had personally developed special tournaments for teens, college students, celebrities and other age and skill categories. Like his early work on Reach for the Top, this fit in with his lifelong commitment to engage in efforts to educate young people on geography, politics and other issues. By the end of the 1980s and mid-1990s, he was the regular host of the Canadian Geographic Challenge (and confessed, while moderating the biennial National Geographic World Championship, to harbouring the most pride for the frequently high-performing teams from Canada).

“I love working with young people,” he said on more than one occasion, “and seeing how bright these young geographers are.” He told finalists in the Canadian Geographic Challenge that to understand and react to current events — from elections to environmental disasters to war — we must have a strong grasp of the geography of our country, our continent, our planet: “All events are geographic,” he says. “They affect us directly.”

Work as a spokesperson for World Vision, a humanitarian organization tackling causes of poverty and injustice, took Trebek all over the globe, and he personally funded the building of medical facilities, a school, eight wells and other infrastructure in a Zambian village of 1,700 people that he and his family “adopted.” Another charity he worked with, WonderWork, helps children born blind, with cleft palates or clubbed feet, or who have been burn victims.

Besides a 2017 nomination to the Order of Canada (for “iconic achievements in television and promotion of learning”), Trebek was on the receiving end of numerous awards and honours over the years, including a Lifetime Achievement Award from the National Academy of Television Arts and Sciences, and he and Jeopardy! received the Peabody Award in 2011 for “encouraging, celebrating and rewarding knowledge.” In 2013, he was inducted into the Broadcasting & Cable Hall of Fame, and is one of the few celebrities to have been honoured with a star on both the Hollywood Walk of Fame and the Canadian Walk of Fame.

He has won the National Geographic Society’s Alexander Graham Bell Medal and The Royal Canadian Geographical Society’s Gold and Lawrence J. Burpee medals — all in recognition of his dedication to raising geographic literacy. In 2019, the Society also renamed its Geographic Literacy Award the Alex Trebek Medal for Geographic Literacy, and made Trebek the first recipient of the newly renamed honour. Without his foundation’s support for the Canadian Geographic Challenge the RCGS would not have been able to hold a live, face-to-face annual competition for the country’s top 20 geography students for the last several years.

“Friendly competition,” said Trebek, “is one of the best ways for students to really learn about our country and the world.”

“Alex did so much for geographic literacy over the course of his career,” says RCGS CEO John Geiger. “He helped to inspire thousands of young people to learn more about our country and our planet.” 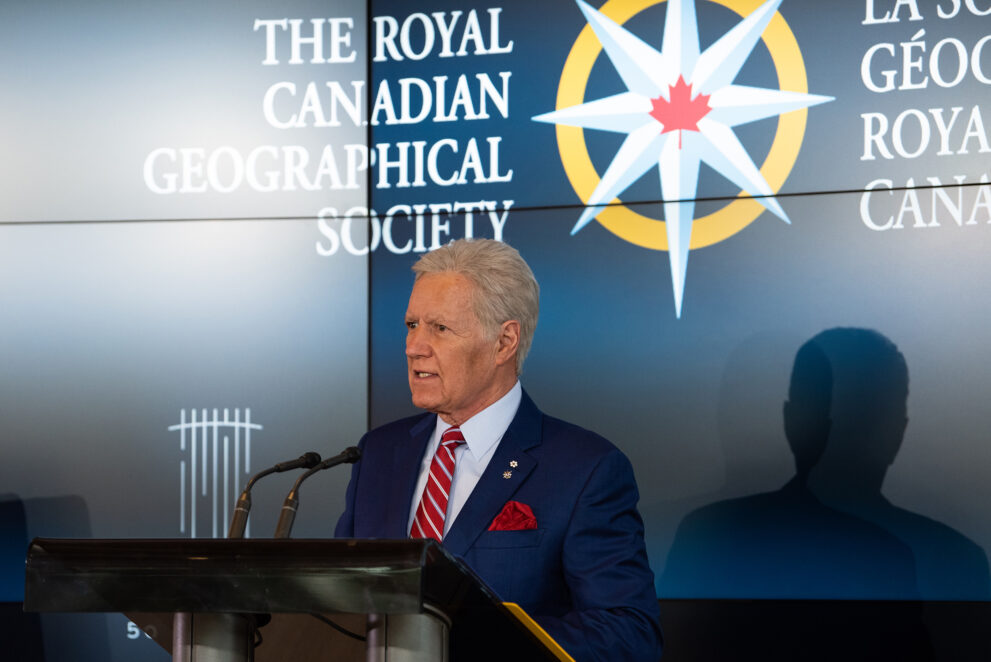 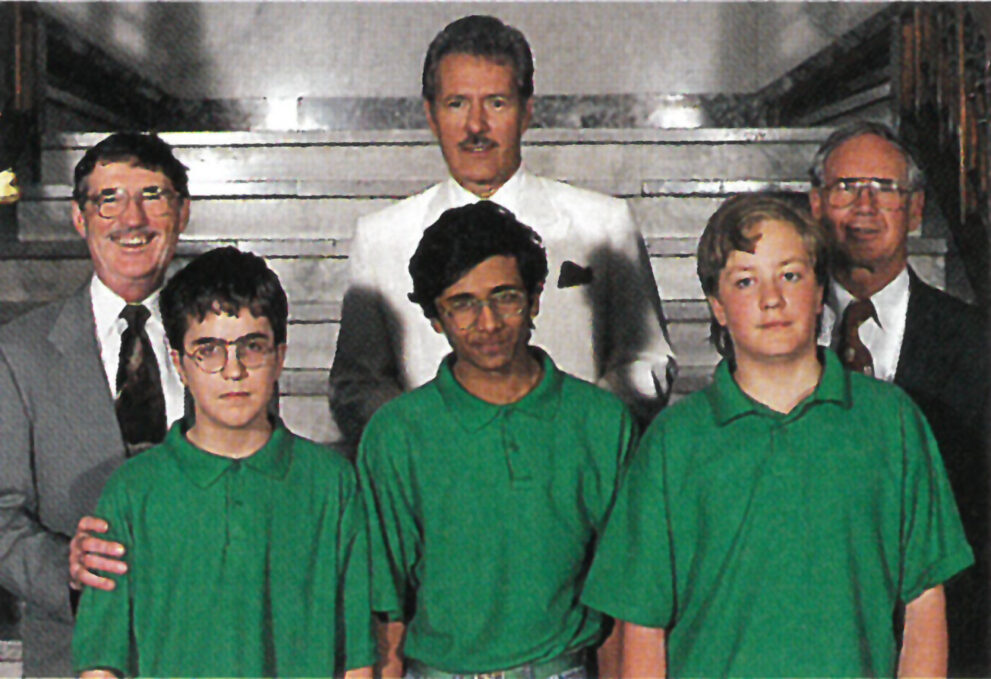 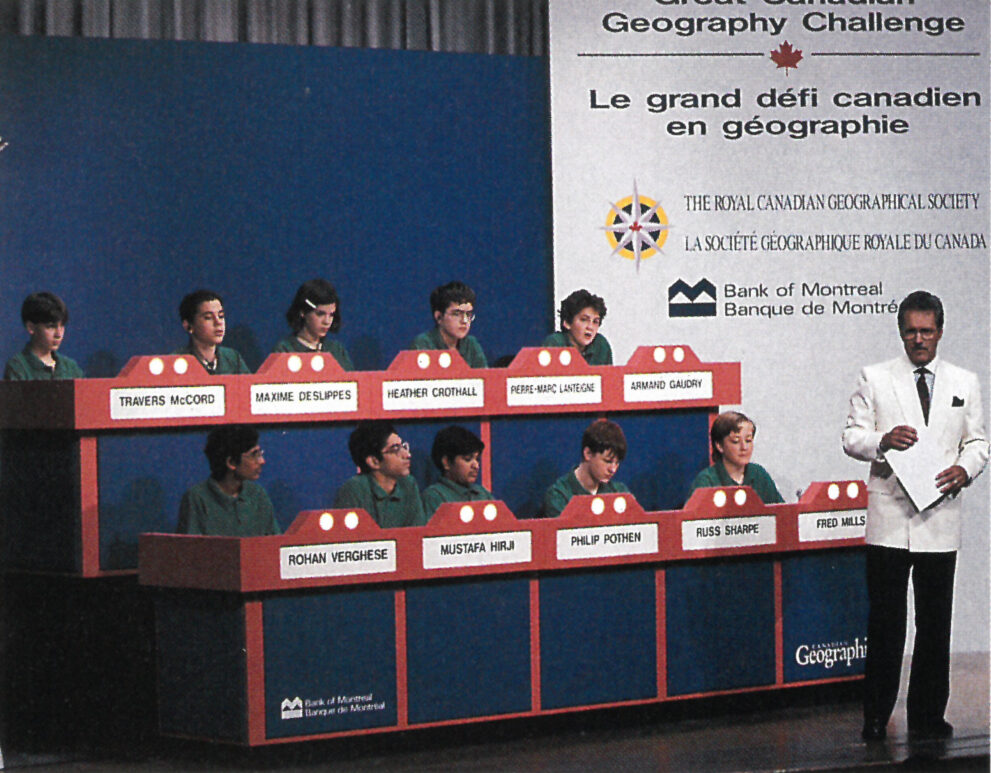 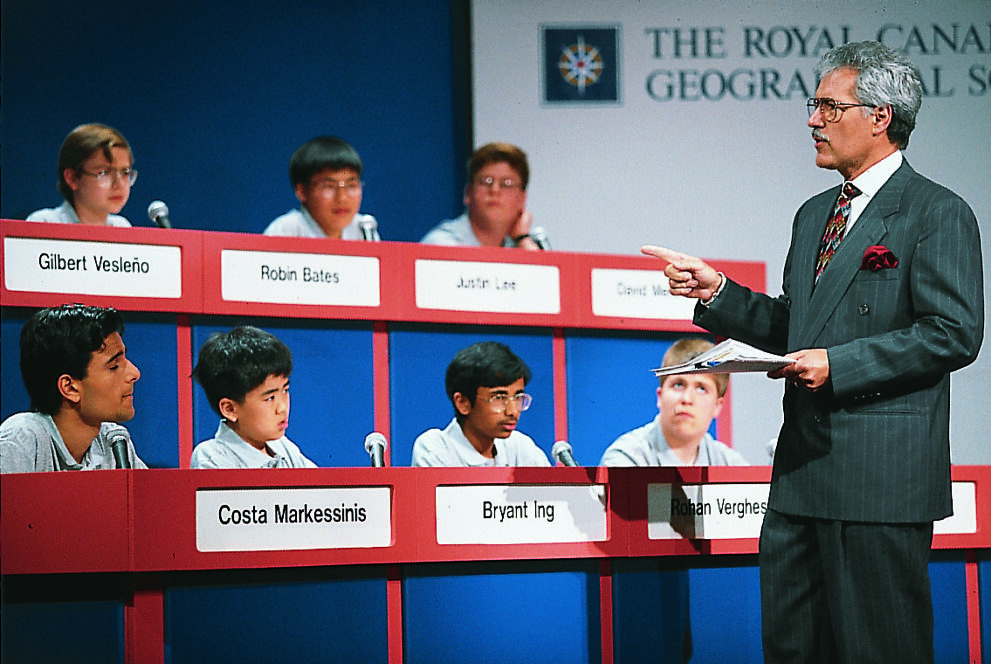 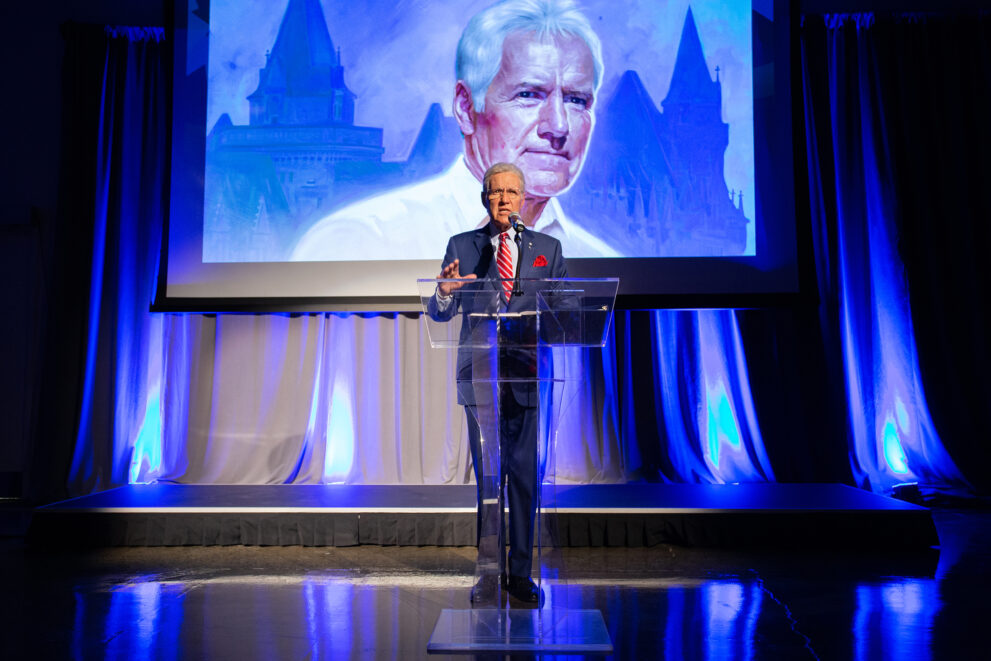 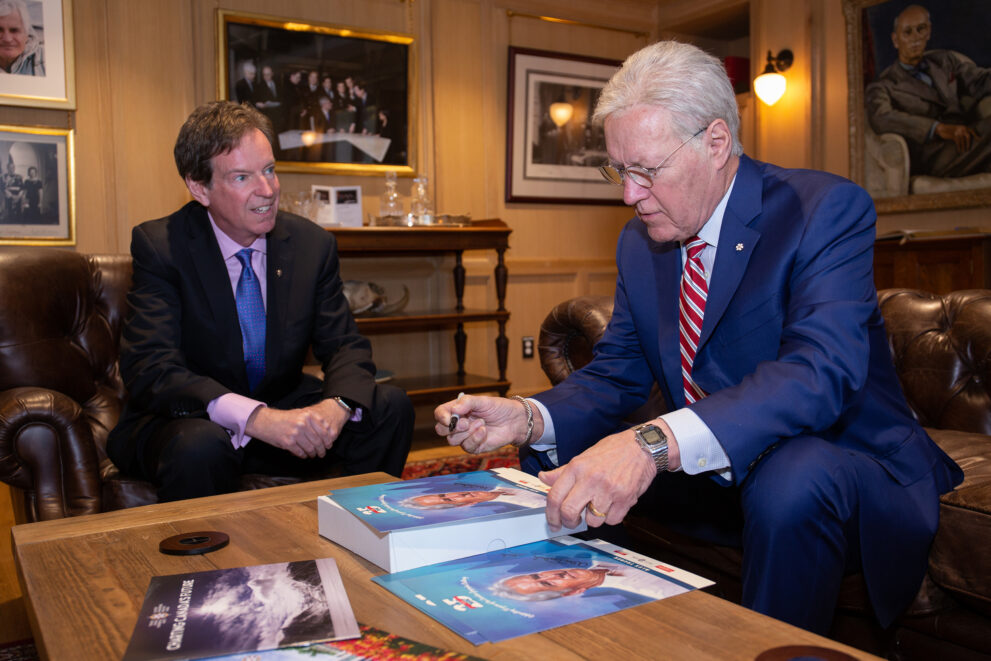 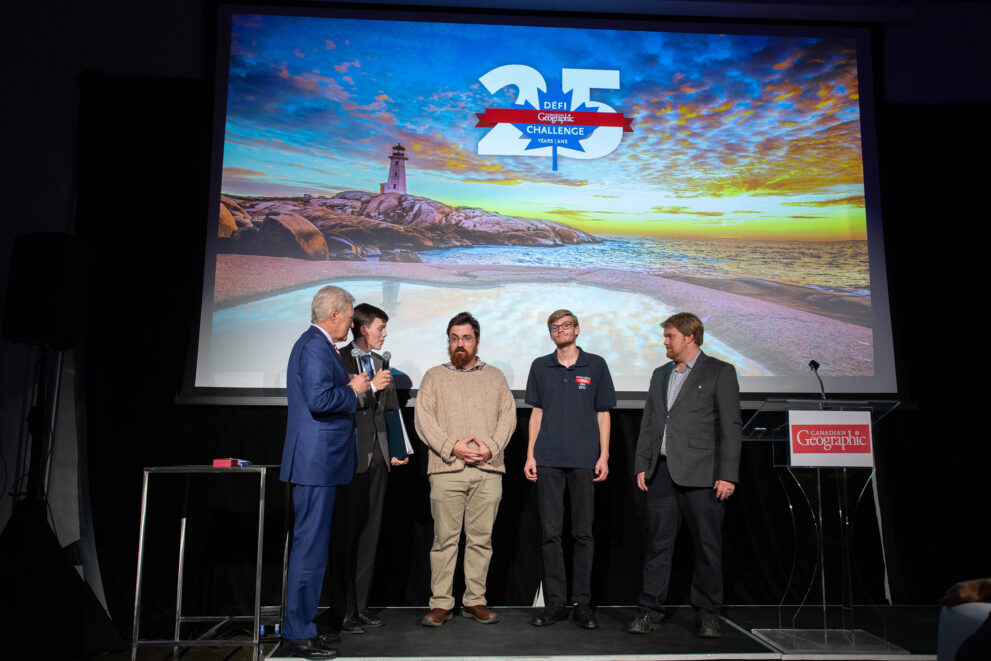 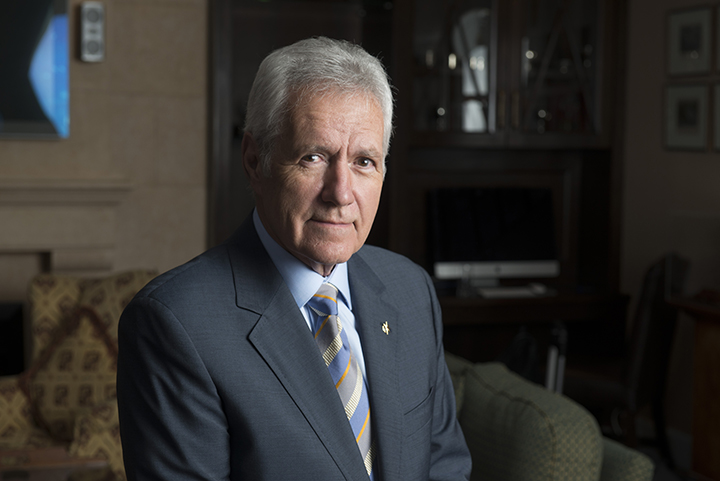 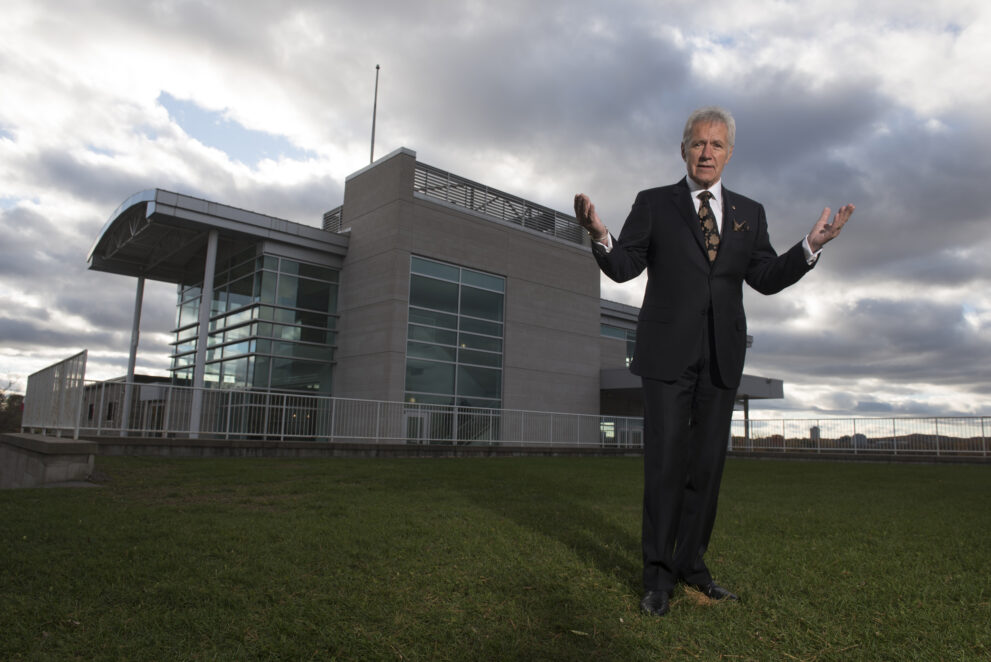