Report and photos by Zac Robinson

Mount Logan, Canada’s highest peak, is located in the Icefields Ranges of the Saint Elias Mountains in Kluane National Park and Reserve, Yukon. Our team skied up the King Trench route to access the mountain’s high summit plateau, where various scientific projects were conducted.

Planning for the initiative was a wee bit bumpy – our website launched in December 2019 in advance of the May 2020 expedition, but the COVID-19 pandemic forced the abrupt cancelation of that initial trip. We refocused for the following year, May 2021. The extra year of planning gave us the time to add other projects to the initiative: namely, the re-measurement of the summit elevation (measured by an RCGS-sponsored expedition in 1992), as well as the installation of a weather station on the summit plateau at Prospector Col. Travel restrictions in the spring of 2021, however, re-shaped both the group composition and size. Four US ice-core scientists had originally planned to join the climbing team – but the closed Canadian/U.S. border prevented their participation. Instead, the two principal researchers were joined by Rebecca Haspel, a geologist from Calgary, and Toby Harper-Merrett, a Vice President of the Alpine Club of Canada.

Territorial travel restrictions also required a 14-day self-isolation period in Whitehorse before we were permitted to head further into the Yukon. We rented a small house in a Whitehorse suburb in late April, and spent our quarantine time organizing and packing gear, familiarizing each other with various scientific instruments, and keeping fit as best we could. It was nice for everyone to get to know each other a bit before getting to the mountain. On May 5, with our self-isolation period completed, we traveled west with a local shuttle (Black Bear Wilderness Adventures) to Haines Junction and beyond to Silver City, where the outfitter at Icefields Discovery was to fly us to the mountain’s base. We needed flyable weather, and we luckily had it. Two flights in a turbo-charged Helio Courier on wheel-skis got all four us, plus gear, into base camp on the Quintino Sella Glacier. By day’s end, we were at the foot of the mountain, and ready to go. 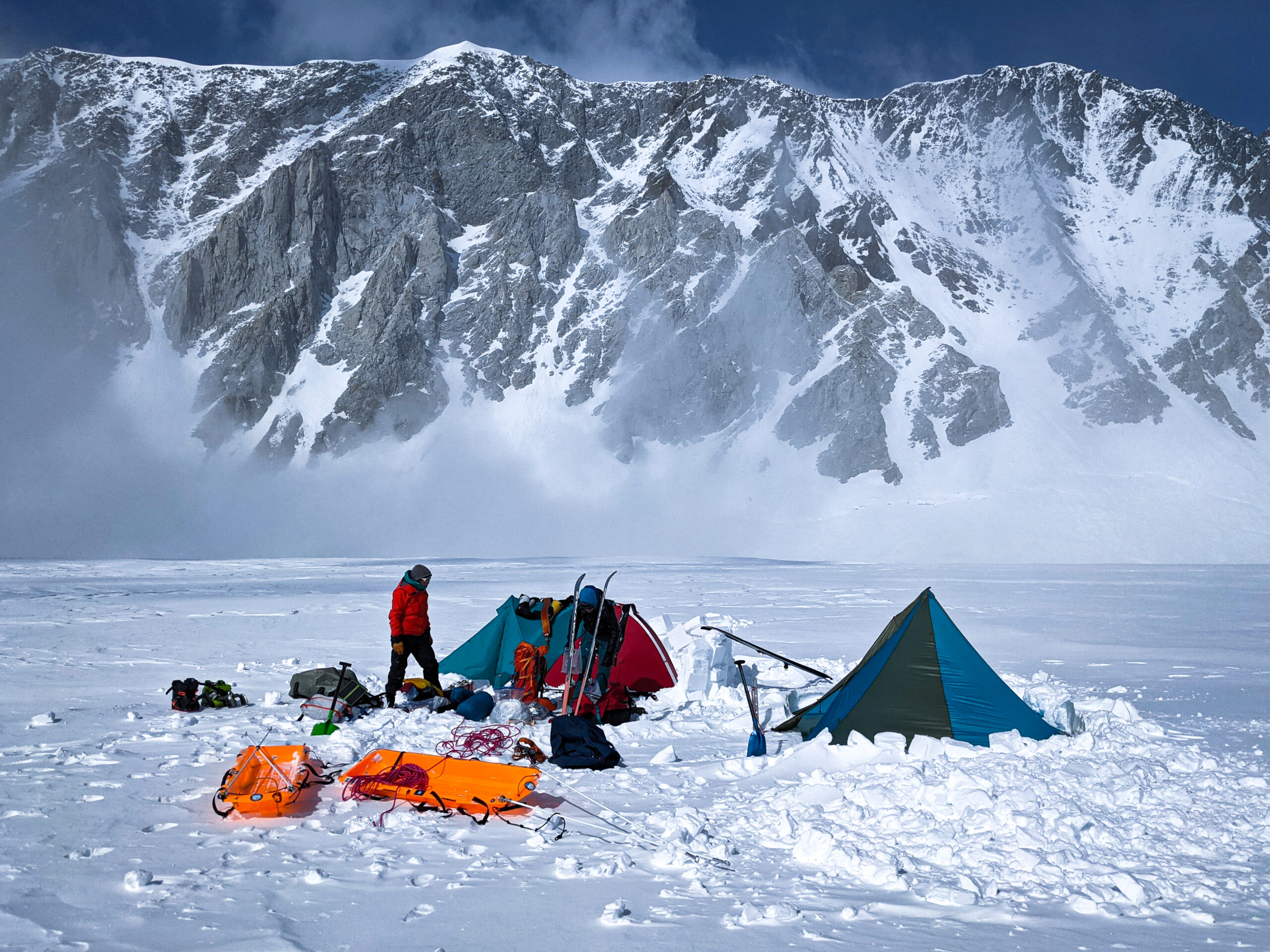 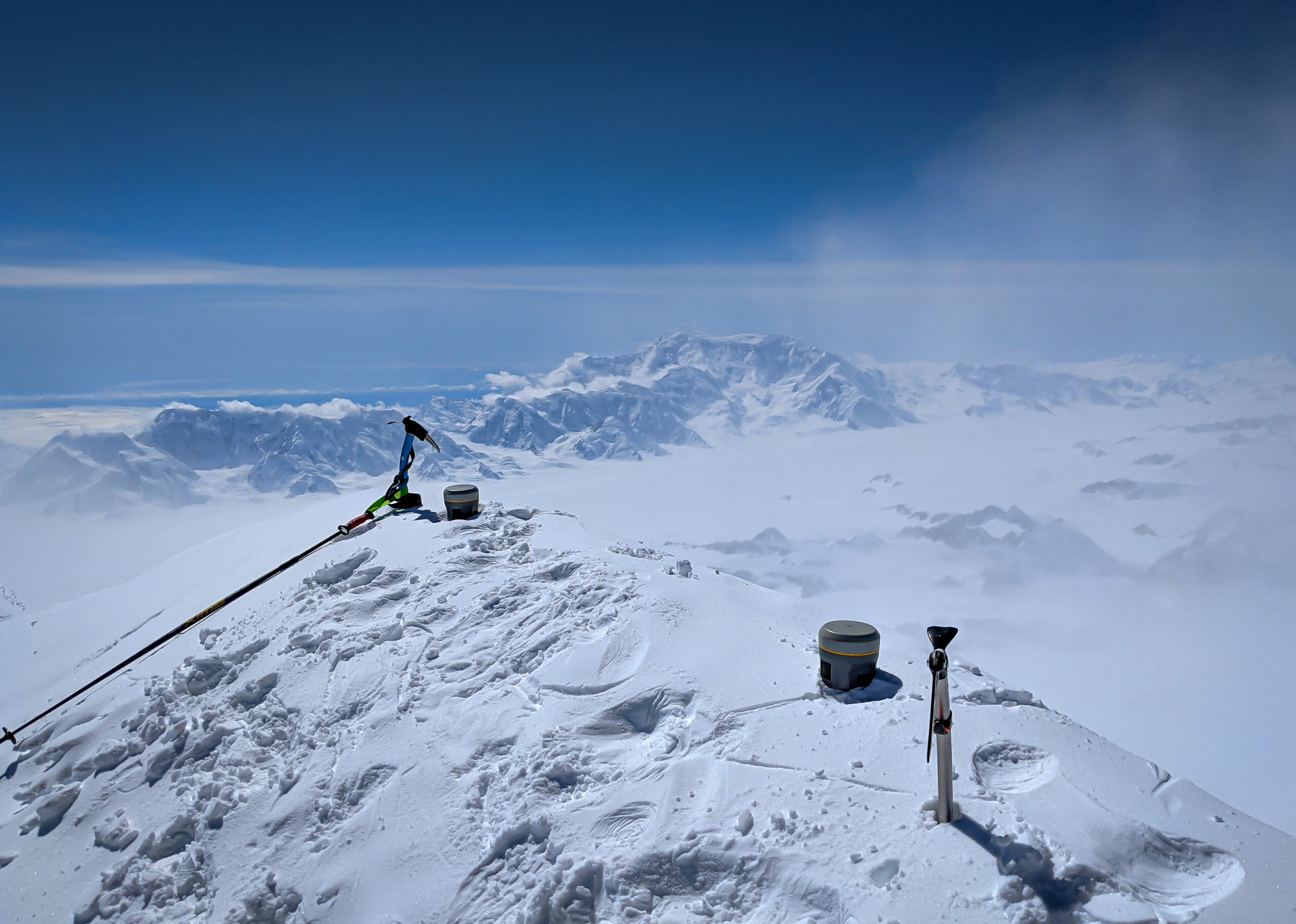 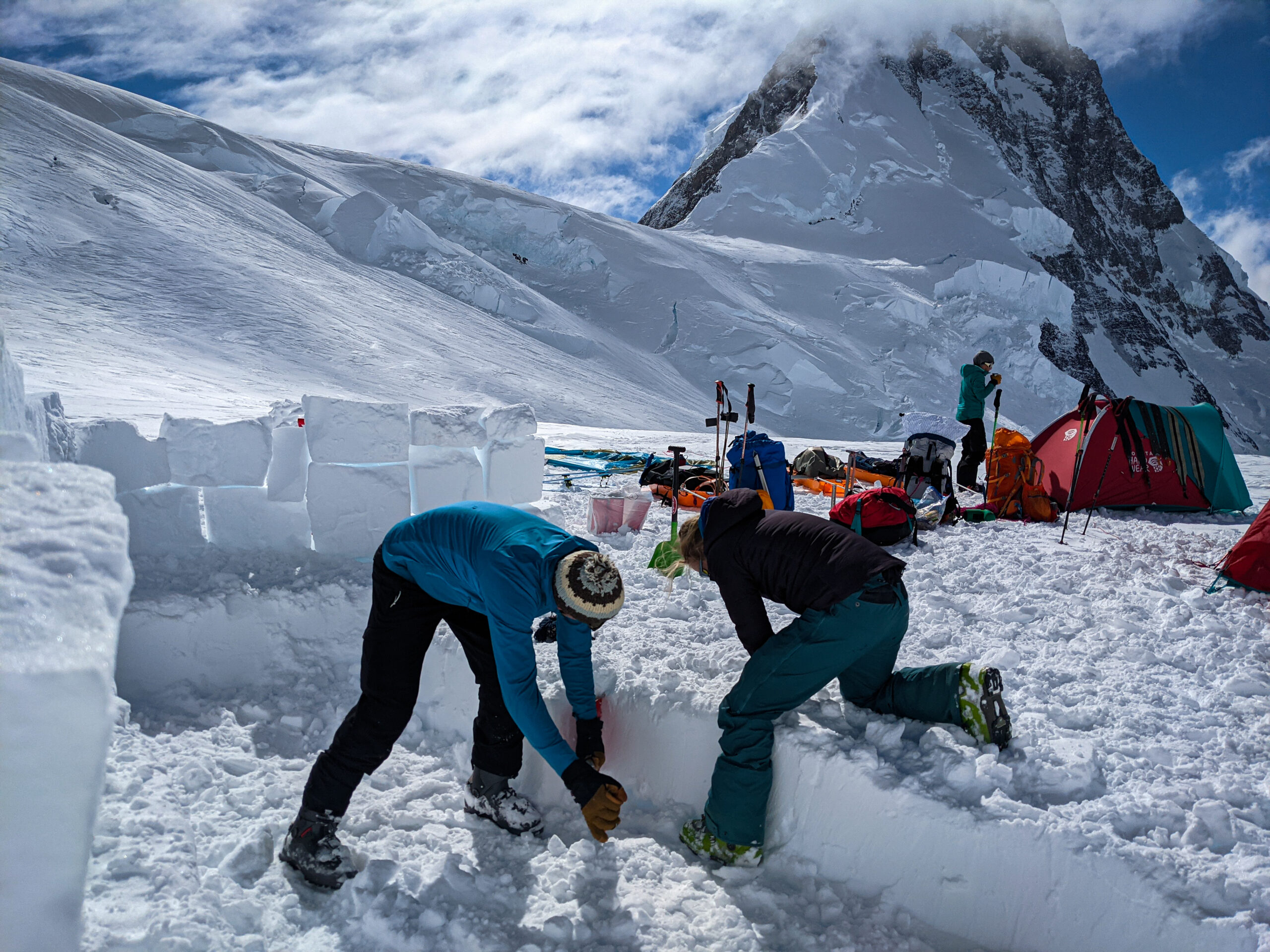 Travel up to King Trench went fairly smooth. The days quickly morphed into one as we ferried sled loads of supplies up the mountain, descended to sleep, and then pushed camp up the next day, only to repeat the process again, and again. This style of climbing permitted our bodies to acclimatize gradually to the altitude, and kept the weight our respective loads (semi) manageable. We were traveling with 14 days worth of food and fuel – enough, we hoped, to easily get us up to the plateau, where a high cache of food and fuel was set to be flown in with additional scientific gear.

All in all, we utilized four camps above our initial base camp – Camp 1 in the King Trench proper, Camp 2 second at King Col, Camp 3 on the “Football Field,” just below Prospector Col, and a final Camp 4 up on the summit plateau itself, just below the Prospector-Russell Col. Route-finding up the King Trench was made straight-forward by a useful aerial photograph given to us by friends with Parks Canada Visitor Safety staff. The image had been taken during one of their early season training flights from atop King Peak, and it showed the glaciated route between King Col and Prospector Col. This stretch is the crux of the route insofar as it contains several complex obstructions, including a lower icefall just above King Col. But the birds-eye view gave us the vantage we needed to sneak through the various crevasse systems efficiently and safely. That, and we had breaking trail Rebecca Haspel – who is an awesomely strong and talented individual.

It took us eight days to ski from base to high camp on the plateau – on the whole, pretty good time. The weather helped. In fact, only one day of travel during the ascent was lost due to poor conditions – there’s not much to do beyond bunkering down in ninety km/hour winds!

Upon arriving at the summit plateau, we were met by a helicopter (Horizon Helicopters), which ferried up additional scientific gear and extra food/fuel. We built a high camp near the flats under the Prospector-Russell Col, which became home for the next five days. During this time, a ground-penetrating-radar survey of the area was completed – the data from which will help Alison to determine the site for ice-core drilling in 2022. Once the survey was completed, on May 18, we travelled together
across the twenty-kilometre-long plateau to its far eastern side, where we ascended the mountain’s main summit. Only 35 minutes were spent on the top, just enough time to measure the elevation using GNSS receivers, take repeat photography, and slap a few high-fives. From our high camp, it was a 13-hour round-trip.

One objective remained: the installation of a weather station. Logistically speaking, May 19 was the trickiest day of the expedition. A sense of urgency had settled in after we received a weather forecast via InReach from a reliable friend on the outside – we were soon to lose what had been a relatively stable weather window. We had just one good day left. This meant we needed to get off the plateau – or risk getting stuck there, exposed with little protection, for an extended period. And so, the day after
our successful summit bid, we went into triage-mode: Alison and Toby packed up their personal gear first thing in the morning, and headed straight for Prospector Col, the exit-point from the plateau and also the site chosen for the weather station, while Zac and Rebecca broke high camp and prepared the science equipment for a hasty helicopter pick-up. A machine whisked in around mid-day, first to drop off weather station equipment to Ali and Toby at the Col, and then to fly over to Zac and Rebecca and pick up the radar equipment. It all went off without a hitch. Zac and Rebecca then finished breaking camp, and skied to the Col to join Alison and Toby, who had begun to working on the station. By mid-afternoon, we together competed the installation as temperatures dropped and the winds picked up. In the early evening, as the weather station was belting out its very first signals via satellite, we skied off the plateau, and descended to our old camp at the Football Field. Aside from some minor frost nip, we counted ourselves very lucky. The following day, we were tent-bound, with zero visibility.

The subsequent descent to base camp was fairly straight-forward. Taking advantage of a short weather window on the morning of May 21, we were able to ski down to icefall above King Col, where, now below the cloud ceiling, we did two technical lowers of the sleds down the steeper slopes. Once below the icefall, at the head of the wide King Trench, the going was easy. We slid into base camp by late afternoon. Continued unstable weather conditions delayed any hope for a quick pick-up, however. It would be another three days before a plane could get in to get us.

Overall, we were very happy with the expedition. We had good weather when we needed it. We had a fabulous, supportive team. We skied up and down the highest mountain in Canada with just the right mix of humour, silliness, and good cheer – and even got to celebrate not one but two birthdays (Zac’s and Alison’s) along the way. And we were able to accomplish all of our objectives. We were especially lucky to have enjoyed our time on the mountain in a relatively “quiet” year. There were only two other teams on the King Trench: a foursome from the Yukon, and two kite-skiers from Invermere, BC. Everyone reached the summit.