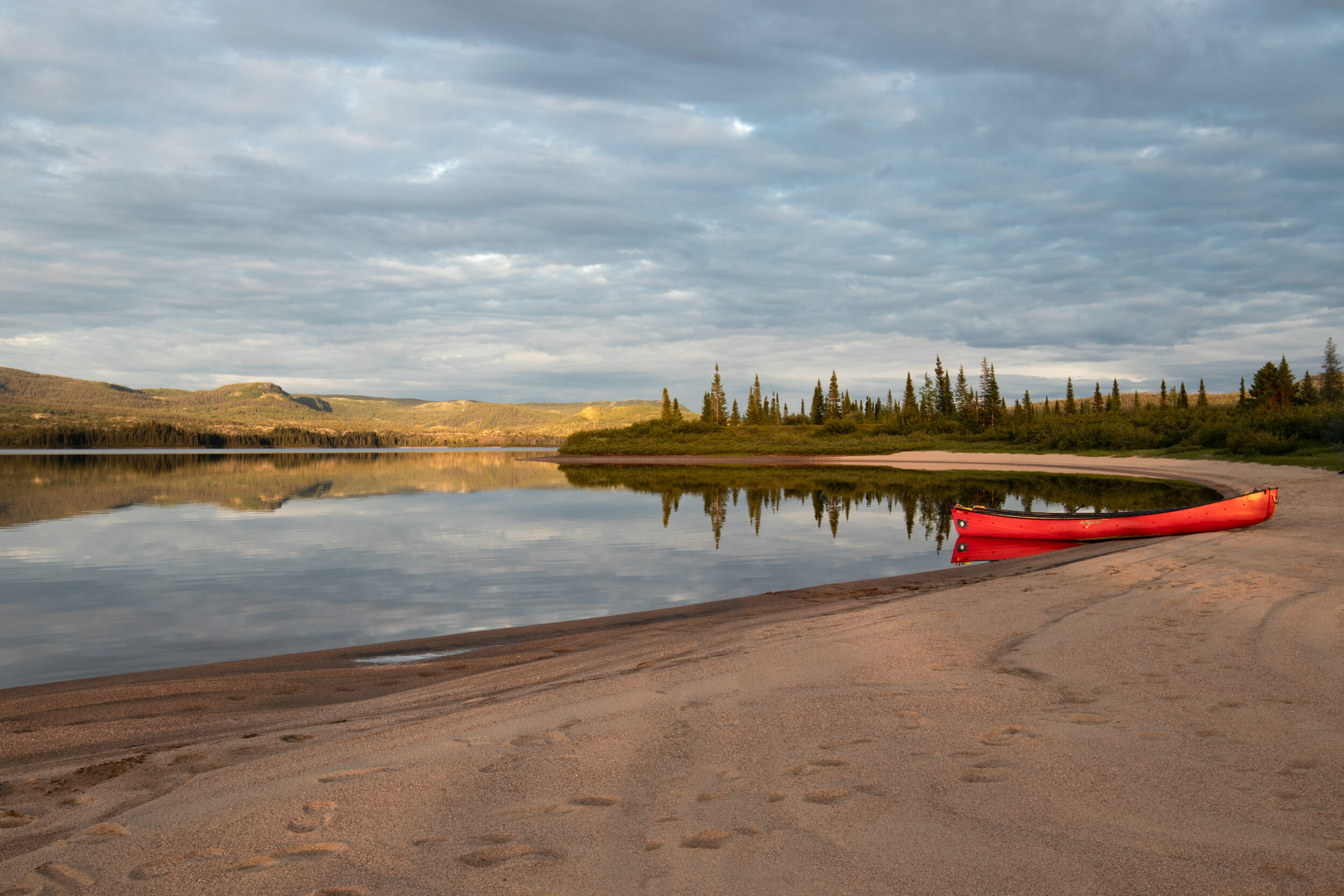 With patience and persistence: Maze to the Aguanish

I stiffly kneeled in the stern of the canoe, scanning vigilantly for a route to take our boat as we floated towards yet another boulder-strewn section of the river. Again, we were forced to the shoreline to unpack the maze of obstacles that lay before us. Will we paddle, line, walk or portage?

We eased the nose of the boat into an inviting eddy and my paddling partner, Matt, cautiously felt around with his foot for a steady rock to hold his weight. All rocks are not created equal – some roll and some slip, and we were keenly aware of the consequence of a miss-step in such a remote place. As Matt worked on securing the boat, childhood friends, Alex and Eric, pulled in beside to follow suit. Drenched from wading the previous set of rapids, our team scrambled onto the rocks to see what lay ahead. We knew the river was going to be challenging, but the rocky terrain and seasonably low-water levels were making progress painfully slow on this near forgotten river in Quebec’s deep wilderness.

The Aguanish (also called the Aguanus) flows through the heart of Côte-Nord, Quebec. Starting among the sphagnum-rich bogs of the Labrador–Quebec plateau, the unassuming river quickly gains momentum as it falls off the ancient Laurentian mountain range through an array of commanding canyons, magnificent drops, and glacial landforms (i.e., eskers, drumlins and kames). Historically, the trappers of Aguanish relied on this powerful river as a traditional hunting and fishing ground. Tales are told of the long journey they would take up the treacherous shores to their trap-lines deep in the mountains. Today, the river is rarely traveled and has only seen a handful of documented descents in the last half-century. The ambiguity of this little-known area of Côte-Nord has had me fantasizing of paddling this mysterious waterway for the past two years.

Our team consisted of Matt Balcombe, Alex Traynor, Eric Taucer and myself. Matt and I would start our 30-day journey at the Oreway Train station of the Tshiuetin Rail Line and travel 350 km east across the plateau to the headwaters of the Aguanish. There we would meet Alex and Eric who would be dropped off by float-plane 17 days later. The four of us would then descend the river and finish our voyage in the coastal village of Aguanish on the Gulf of St. Lawrence.

The Labrador-Quebec plateau has a rich history of being the ancestral homeland of the Innu who called the territory Nitassinan – meaning “our land”. Large lake systems expand across the plateau characteristically marked with black spruce horizons and scoured shorelines. Broad white-sand beaches streak across points and coves offering a welcome reprieve for weary travelers. We spent many nights camping on these sandy shores taking in the ocean-like vistas we had all to ourselves. Unbeknownst to us, a record-breaking heatwave pushed across the country making for balmy breezes and glass-like conditions as we travelled across the giants that are Lac Joseph and Atikonak Lake, two major lakes of Southern Labrador.

As we eased our way into wilderness travel, we knew we had hard work ahead of us. To make it to the Aguanish we had to cross over two heights-of-land (a divergence of watersheds), and from my experience height-of-lands are never easy. Ponds and streams frequently peter-out into an expanse of boot-sucking, bug-infested, string bogs making travel slow and difficult.

The first crossing was a landscape of a burnt-down spruce bog that connected Labrador’s Atikonak Lake to the bordering Romaine River watershed. For past travellers looking to get their thrills on the Romaine’s infamous white water this would have been the traditional route. Though, since the development of the Romaine’s Hydroelectric Complex commenced in 2009 the landscape has indefinitely changed due to mass diversions of the waterway, making the river no longer navigable. Today all that remains is the odd sign of a cut log and overgrown section of worn-down trail that fades into a landscape of charred wood and barren hills symbolizing the end of a chapter in Canadian canoe culture.

After two days of slow progress, we finally made it to the mighty Romaine where we witnessed first-hand why this river was prized as both a valuable resource and for its whitewater. The river’s shear volume and power was felt with every paddle stroke as we easily sailed along with the current. Our time on the river was short-lived as we travelled 60 km before reaching our exit on the Senecel River – a major tributary of the Romaine that flows from the east. We would now travel 80 kilometres up the Senecel towards the second and final height-of-land where we would cross over into the Aguanish watershed to our meet up point.

With no information on the river, the Senecel was the most mysterious section of the route which made progress excitingly uncertain. As we watchfully approached, the outflow modestly spilled over an apron of Precambrian rock into the Romaine’s Lac Anderson. From first glance we were optimistic that tracking our boat would be the best option, but as we started the ascent we quickly realized that this would not be possible. The slow moving current rapidly evolved into an alder choked river that forcefully pushed through a sequence of narrow drops and ledges. We prepared our boats and packs for an over-land portage. Although not long, the trek was treacherous. Every step required the need for complete concentration and focus as we navigated through an entanglement of densely packed fallen spruce and birch trees. The forest floor was made up of loose rocks and holes hidden below a foamy pale green carpet of caribou moss which tempted to give way with every step.

As we slowly made our way upriver carrying around sets of impassible rapids, the plateau that we became so familiar with over the past two weeks slowly began to give way to the ancient crests of the Laurentian mountain range. As the landscape shifted, the river began to open up into a sequence of tannin-rich shallow lakes and navigable current allowing us to track our boat up-stream and over the final height-of-land. With a day to spare, we awaited the boy’s arrival on Lac Uatnakantuk.

The arrival of Alex and Eric brought a surge of energy to the team as we prepared for the second half of the journey. Unlike Matt and I who were eased into the trip, Alex and Eric were starting at the most technical part of the route. The upper 50 kilometres of the Aguanish is marked with many continuous rapids that forcefully tumble down the boulder-strewn river. Many sets that would have been navigable in higher water had to be meticulously negotiated using ropes as we waded through knee-deep current. Progress was painfully sluggish and for the first week we often wondered if we would ever get off the river, at times travelling as little as 5 kilometres a day.

With patience and persistence, the river steadily gained volume as the branches of the upper Aguanish converged into a significant watercourse channeling into a deep river valley that funnels into a torrent of chutes and waterfalls. We would often have to choose to line our boats through perilous sections of white-water or portage our gear across the gnarled countryside. During these hard days I was often humbled by the incredible stamina and endurance of the indigenous and past travelers who journeyed these lands for their livelihood.

The landscape was a true balance of power and grace as we descended the Aguanish. The exhilarating sections of white-water intermittently softened to a meander as the river cut through deep stratified sand dunes laid down by the historic Laurentide ice sheet. The strong contrast of rock and sand kept things interesting as we never knew what was going to be around each river bend.

As our time on the Aguanish was nearing the end, our physical and mental fortitude was put to the ultimate test as we approached the “Canyon de le Grande Chute” – a daunting 1 kilometre canyon holding a sequence of strong rapids and waterfalls. The canyon’s walls rise about 40 m above the water, cresting with thick trees and a sheer cliff that extends beyond the river. Historically the Aguanish trappers used to take a route that skirted the mountain on river-right which would be our best option if we could find their trail. Lucky for us it didn’t take long to discover remnants of an old cedar strip canoe and a rubber boot sunken in the moss. Though, unlucky for us, after an exhaustive search this was all that we found. The densely packed forest had undergone significant change since the Aguanish trappers used to travel these lands over 50 years ago. Years of harsh weather may have altered the succession of the forest enough to cause regrowth of young spruce and underbrush. After much consideration, we concluded that if any trail existed, it had been erased by time. The bleak realization started to sink in that we would be forced to forge our own route across the heavily forested mountain. On day 25 as the daylight dwindled, we set up camp for the night on the mountainside. It was a quiet evening as we mentally and physically prepared for the unknown that lay ahead.

The portage over the mountain took two labour intensive days to cover a mere 2.2 kms by blazing trail and hauling gear through the steep and uneven terrain. We would often get “cliffed out” by the steep rock walls and gullies that would force us far and wide of the river. We traveled at a snail’s pace of 75 meter/hour and by late into the second day we emerged on the other side elated, albeit battered and bruised from the mountain. The portage was appropriately named Folsom Prison, as a tribute to Johnny Cash’s iconic blues single.

After a month of wilderness travel through the blissful array of landscapes and challenges, the familiar drone of an outboard motor echoed in the distance as we approached the small coastal village of Aguanish. We were enthusiastically welcomed by locals who had caught wind of our expedition and bestowed us with a smoked salmon and lots of horn honking. As we unloaded our canoes for the final time, with a heavy heart I looked back up river. Our 620 km journey through the heart of Canada’s land of big hydro and wild rivers was a testament to why this region is cherished by many for both its majestic beauty and raw power.