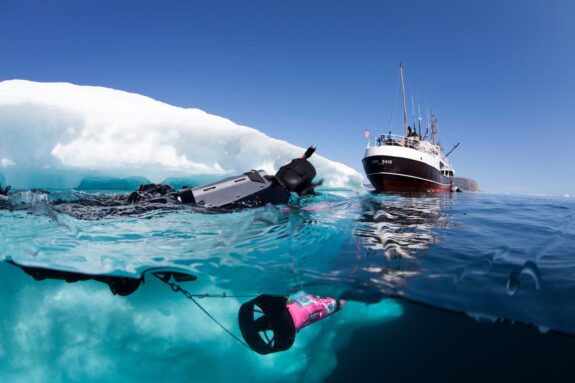 Catch up with some of the Royal Canadian Geographical Society Fellows.

RCGS Fellow John Houston was also recently honoured by being named an inaugural member of The Explorers Club 50: Fifty People Changing the World the World Needs to Know About. He was nominated by another RCGS Fellow – Jason Edmunds, Adventure Canada’s operations lead.

The 50 explorers represent a diverse range of scientific work and backgrounds, with more than 46 countries of work represented from 17 countries of residence. Every honouree is exploring, inspiring and creating the future — the future of the planet, of sustainability, of paleontology, of biology, of what our communities should look like and so much more.

The EC50 was established to not only reflect the great diversity of exploration, but to give a voice to trailblazing explorers, scientists and activists doing incredible work that will set the Club on its course for decades to come.

Daisy Gilardini is honoured to be part of the jury of the “Environmental Photography Award” organized by the Prince Albert II of Monaco Foundation.

For this first edition, the Foundation is pleased to count on a jury of internationally renowned photographers and personalities committed to the preservation of the environment: Ragnar Axelsson, Laurent Ballesta, Anthony Boira, Nick Danziger Exhibitions and Events, Dharshi Photography, Daisy Gilardini Photography, Jean-Michel Krief, Lisa Samford and Olivier Wenden.

To participate, you can to submit up to five photographs in one or each of the award’s categories, by clicking here. Registration will be open until March 28th.

Fellow Lorie Karnath has been named the president of the newly founded Next Breath charitable organization. The not-for-profit is focused on promoting global health and hygiene through education, advocacy and, in particular, fostering access to protection against respiratory disease for school children and their learning environments around the world.

An editorial that delineates the Next Breath platform and outlines many of the scientific lessons learned during the pandemic relating to air quality and the disproportionate effect this has had on schoolchildren, especially those in the developing world, was recently published and more than 30 leading scientists from around the world have supported the initiative. A global conference to further the Next Breath mission will be held in Switzerland later this year to map out pathways to improve the quality of air that all share and breath. The program will be streamed.

Dr. André Lapierre, RCGS Fellow since 2011 and emeritus professor of linguistics and canadian studies at the University of Ottawa, was among the 25 appointees to the Order of Ontario announced on Jan. 1st, 2021, by the Honourable Elizabeth Dowdeswell, Lieutenant Governor of Ontario. He authored the first comprehensive history of French place names in Ontario and his expertise on the bilingual treatment of geographical names in mapping and government publications was an important component of Ontario’s French Language Services Act.

RCGS board vice-president Connie Wyatt Anderson has been reappointed to a five-year term as chair of the Geographical Names Board of Canada. As the national coordinating body for place names, the GNBC makes a significant contribution to Canada. Most crucially, recognizing Indigenous place names contributes to preserving and revitalizing Indigenous cultures, histories and languages, and plays a vital role toward advancing reconciliation.