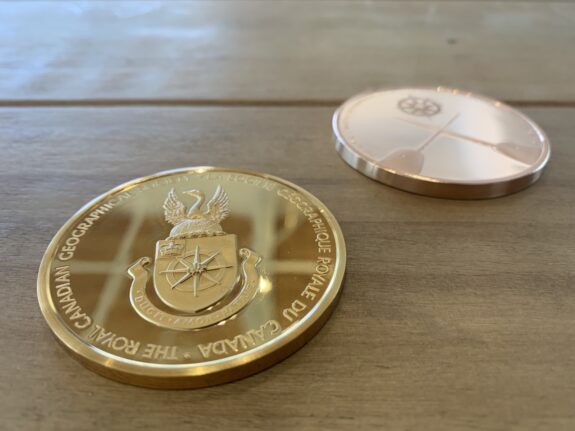 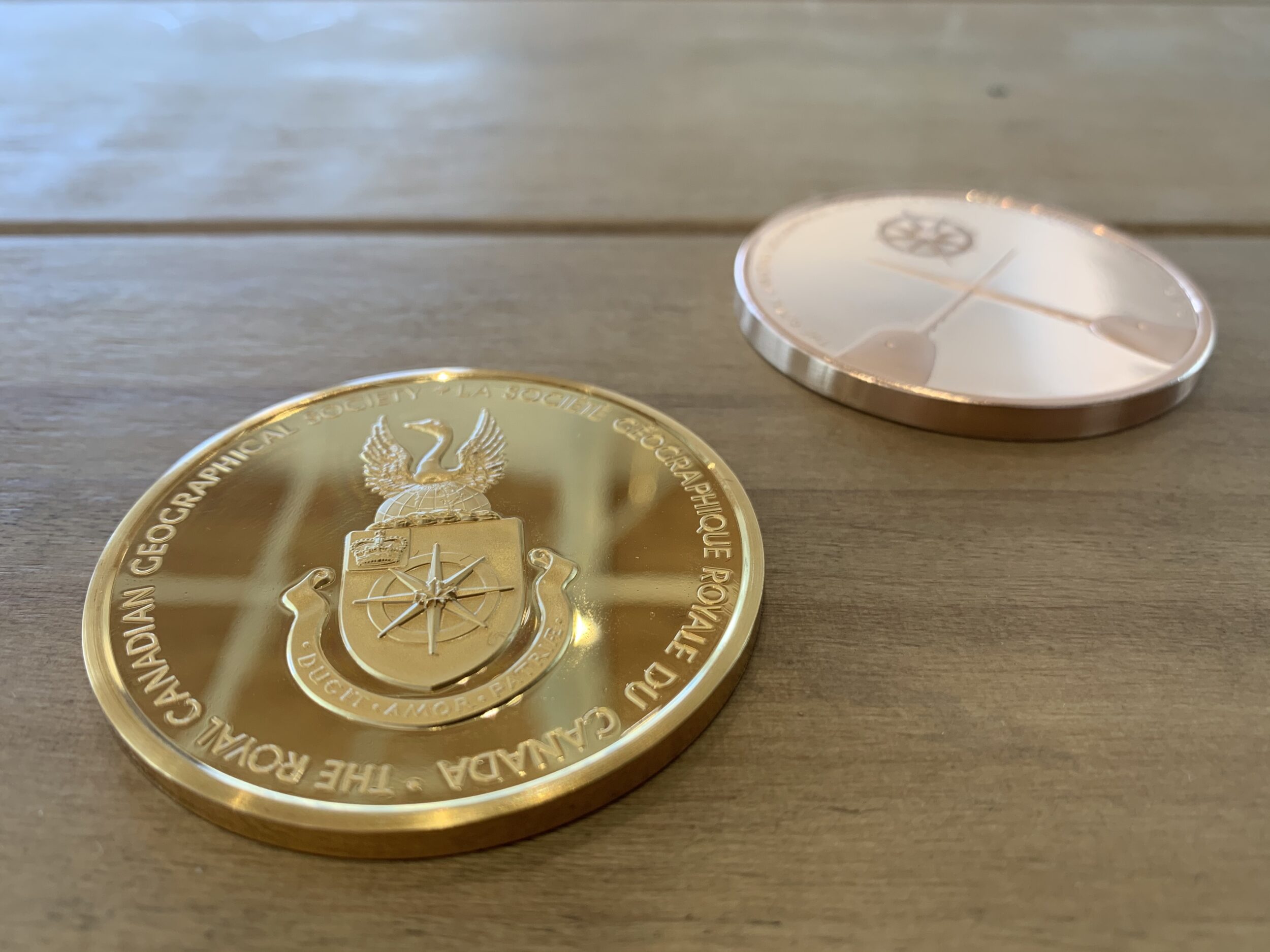 Each year, the Royal Canadian Geographical Society honours trailblazers who truly exemplify the Society’s mandate to “make Canada better known to Canadians and to the world.” In 2021, 18 medals were announced, recognizing outstanding achievement in the fields of geography, education, science and exploration. As well, a number of awards were bestowed on individuals who made a special impact in 2021. The awards were announced at the Society’s Annual General Meeting on November 16 and recipients will be making acceptances during the Fellows Show on November 17.

“This year’s awards have gone to an extraordinary group of people, from artists to educators to scientists,” said John Geiger, CEO of the Royal Canadian Geographical Society. “We are honoured to bestow recognition upon each of these individuals for their outstanding work in their fields and for their dedication to the Society and the discipline of geography.”

A number of this year’s honorees will take part in the virtual Fellows Show. Louie Kamookak Medal winner Gurdeep Pandher will get the proceedings off to a rousing start with a Bhangra performance from his home near Lake Laberge, Yukon. And an appearance by William Shatner, recipient of the Society’s 2021 Gold Medal, is guaranteed to be a highlight. Shatner has recorded a message with fellow actor Jared Harris (a 2018 recipient of the Louie Kamookak Medal).

The Massey Medal, which recognizes outstanding career achievement in the exploration, development or description of the geography of Canada, was awarded to two recipients in 2021:

Dr. Yvan Bédard, geomatics engineer and pioneering researcher in geographical/geospatial science, has pioneered the way we think about geospatial data — from creating better database design to enhancing data definition. The energy Dr. Bédard brought to his career in geographic data modelling has persisted into his passion for fine art landscape photography, in which he seeks to educate people about Canada’s geography and advocate for protection of the environment.

Geologist Dr. Barbara Sherwood Lollar has advanced our understanding of the history of Earth’s geography. From the billion-year-old water that Dr. Sherwood Lollar collected from deep beneath the surface of the Canadian Shield — now residing at the Ingenium Centre, Ottawa — to her research into the microbial communities in the deep gold mines of South Africa, her work is transforming our understanding of Earth science.

Four Gold Medals were awarded this year. The Students on Ice Canada C3 organization was recognized for its for leadership, engagement and inspiration of youth in polar education. Looking up into the skies, astrophysicist and planetary scientist Sara Seager was lauded for her incredible work exploring the frontiers of our universe. Seager is a global leader in the study of exoplanets — the planets lying beyond the realm of our own solar system. She may well be “the woman who might find us another Earth,” according to the New York Times. Astronaut and engineer Jenni Sidey-Gibbons is the third Canadian woman and youngest Canadian to become a NASA astronaut. While studying in the U.K., she co-founded the Cambridge chapter of Robogals, an international organization to encourage young women to get involved in STEM subjects reaching over 3,000 girls in that country. And a man who needs no introduction, William Shatner, a philanthropist, actor, author, musician, director and producer, received the Gold Medal for his body of work.

The Lawrence J. Burpee Medal was awarded to ecologist Maydianne Andrade. Recognized in the science community for her expertise on the mating habits of spiders, she is also well-known for her advocacy work towards racial equity in STEM.

All hail the volunteers! As a non-profit organization, the Royal Canadian Geographical Society would not be able to fill its mandate without its dedicated supporters. The Charles Camsell Medal was awarded to Alison Gill, former governor and committee member, and Susan Taylor, for her commitment in producing medals for the Society.

The Capt. Joseph-Elzéar Bernier Medal was awarded to renowned Arctic landscape artist Cory Trépanier. Sadly, Trépanier passed away on Nov. 5, just weeks after he was awarded the Bernier medal. Trépanier had recently launched the limited-edition coffee-table book Into the Arctic: Painting Canada’s Changing North. He had noted that through conveying “the sense of wonder and awe I have when I’m out there,” he hoped his work would inspire efforts to preserve and protect the fragile Arctic ecosystem and the way of life of the North’s inhabitants.

Jacqueline Windh — geoscientist, athlete, photographer and author — received the Sir Christopher Ondaatje Medal for Exploration. Windh is currently writing The Food Garden book series aimed at aspiring gardeners who want to maximize their ability to produce their own food.

A professor of geography at Memorial University of Newfoundland, Trevor Bell has been awarded the Martin Bergmann Medal for Excellence in Arctic Leadership. A field scientist with a geographical focus in Arctic and Atlantic Canada, he is the founding director of the innovative SmartICE program, which trains Inuit youth in the use of satellite imagery and local knowledge to make maps for safer travel on sea ice.

The Louie Kamookak Medal was awarded to four recipients throughout the year. Artist Sylvain Voyer, known for his rural landscape paintings, was a leading force in championing Alberta’s provincial art collection and is a founding member and the inaugural president of the Canadian Artists’ Representation. Kathy Dembroski is the co-founder of Canada Blooms and a strong supporter of the Toronto Botanical Gardens and the Canadian Canoe Museum; and Gaajiiaawa Linda Tollas of Haida Gwaii is renowned as a seeker and sharer of ancestral knowledge, an educator on Haida culture and an interpreter. With a smile as infectious as his Bhangra dance moves, Gurdeep Pandher brings joy, hope and healing to newsfeeds across Canada and beyond. He was recognized for the national impact he has had by bridging cross-cultural divides, promoting inclusivity and spreading optimism and joy during the dark days of the COVID-19 pandemic.

The Alex Trebek Medal for Geographic Literacy went to educator Randall Wilkie. With several decades of experience in teaching geography at the high school level, Wilkie has spent the last 20 years imparting his knowledge to new teachers as a lecturer of geography methodology at Lakehead University in Thunder Bay, Ont.

The inaugural Gilles Gagnier Medal for Innovation in Geographic Education was awarded to Alberta-based educator Margaret Leland, who emphasizes the importance of mapping skills and geospatial knowledge as a way to get students curious about the world beyond their hometown. Leland challenges her students’ perspectives and helps them to understand their place in the world, both geographically and experientially. Previously called the Innovation in Geography Teaching Award, this award honours the memory of Canadian Geographic publisher and COO Gilles Gagnier, who passed away unexpectedly on Sept. 10.